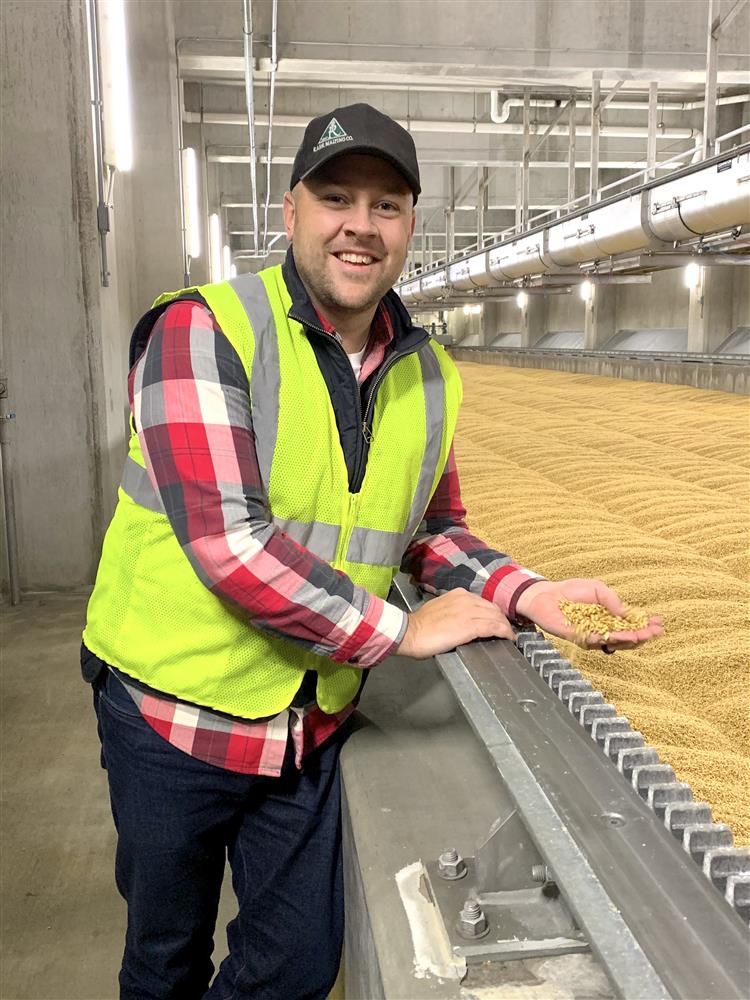 What does it take to bring high-quality, dependable malt to your brewery? Last week we sat down with Aaron Eernisse, the Director of Operations for Malt Production at Rahr Malting Co. to discuss malting and what factors into each kernel. Aaron Eernisse got his degree in Chemical Engineering at the University of Wisconsin in Madison, and after graduation went to work MillerCoors in Milwaukee, WI, and Eden, North Carolina. After MillerCoors, he learned the ropes of malting at another malting company before jumping into his job at Rahr Malting Co.

-What kind of training and education is required to become a maltster?

-You’ll find people from lots of different backgrounds, like people with chemistry,  agronomy degrees, biology, technology, so on, and they all can come into the industry. There’s a number of managers who work here now that worked their way up through experience. My own background is chemical engineering, and our team is comprised of biology, mechanical, agricultural- it’s a mixed bag.

-What’s the toughest part of the job?

- Speaking to malting, it’s managing the coordination and all the moving parts of the operation. The other biggest challenge is producing a consistent product with a living, biological plant. We like to say we don’t make widgets. I’ve never made the exact same batch of malt, ever. The barley is grown in different areas under different conditions and different fields, so no two batches are ever the same. But, our customers expect consistency, and we try to make the most consistent product out of something that’s not inherently consistent.

-How has FSMA affected malting?

-The biggest effect we’ve seen in the malting facility is more documentation. We did everything that was really asked of us already, it’s more about how we logged it, managed it, and actually took credit for what we were doing. Normally we would clean and sanitize something because that was just what the expectation was. Now, we do a better job documenting and logging that. Our process didn’t change, just the way we documented did.

From an operations perspective, it was that I would go in everyday and see that it’s clean, but if somebody wants to come in and know that it was clean two weeks ago, the best way to do that is to make sure that it’s documented appropriately. It also provides a good system of checks and balances to ensure that you’re keeping up with what you need to in regards to food safety procedures.

-How is quality ensured?

-It really starts in the field. We have a team of agronomists that work with our farmers, we try to do as much leg work up front as possible in regards to finding good barely breeds, assisting our farmers, to ensure the highest quality barley that we can get from the field. If that’s done, a lot of our work in the malthouse is set up well. From there, we do a lot of testing and trials on the barley before ever putting it into processing, so we run a number of different analytical tests on the barley to find the best way and best time to process it.

Once we understand that, we can set up the appropriate malting conditions in the malthouse to try to consistently produce. From there, it’s really having a good inventory of different varieties of barley or malt, so that you can appropriately blend it on the malt side and keep it consistent. Each different phase of the process we’re doing everything we can to control the process to create the highest, most consistent quality barley and malt that we can.

-Why does some malt/barley/grain not make the grade?

- The biggest issue would be germinative capacity, the ability for the kernel to germinate again. Obviously when we put it through the malting process, it needs to be functioning and living appropriately for us to malt it and control that process, so if the germination of the kernel isn’t viable, it won’t be fit for malting. Protein is another thing we analyze. Quality we look for as well, depending on customer specifications. Another big one that’s come up recently, specifically in wet seasons that we’ve had, is something called DON, which stands for deoxynivalenol. It is correlated to fusarium, which is a fungus. Fusarium is the fungus that produces DON, and if that is at too high a level, then we have to reject the barley. There’s an FDA limit, and there’s a limit for our customers, but our customer limit is typically lower than the FDA limit.

-Has climate change affected the way malt is done? Could it?

-Yes. We have seen barley and the way it’s grown continue to move north and west, so the actual growing regions are changing. We are also seeing some quality and consistent issues year in and year out due to possible extremes and changes in weather patterns. That can make our job a little bit more difficult. We do our best to work with universities and different breeding programs to make and develop barley varieties that can handle changing weather a bit better, handle extremes a bit better than the past.

This crop year is probably a good example. We had a very inconsistent crop year that will now create challenges for us in regards to managing it. It will require having to do a lot of leg work up front to try to create a steady product on the backend of the process.

-Any personal preferences to a type of malt?

-Recently we’ve been doing Kilned Caramel, and in terms of flavor and smell, and the process associated with it, that’s probably my new favorite malt right now. In terms of a barley variety, which I think is a big one as a maltster- what your favorite barley variety is- Moravian is my favorite. It’s a really great malting variety that does whatever you ask it to do. Looks bright, tastes great, works well; it’s really good.

-Most common question you get during tours?

-How has the malting process changed over the years?

-The malting process has so much history to it, but it really hasn’t changed a lot from its initial process. I think the biggest changes come from automation, and process control. I think the size and scale of malting has gotten so much bigger. Also, with craft maltsters taking much the same path that brewing did, you’re seeing craft maltsters starting to pop up. Those are some of the general trends we’ve seen in malting.